Violent clashes at funeral of Al Jazeera reporter in Jerusalem 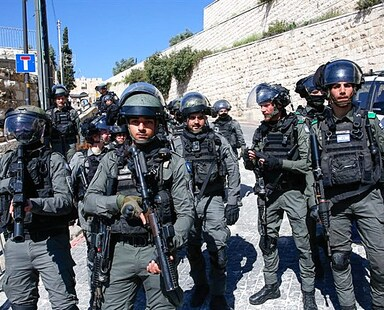 Violent clashes broke out on Friday during the funeral in eastern Jerusalem of Al Jazeera journalist Shireen Abu Aqleh, who was killed during an exchange of gunfire between IDF troops and Palestinian Arab terrorists in Jenin earlier this week.

The Israel Police had taken action before the funeral in an attempt to prevent clashes, including holding a preliminary dialogue with the family members to coordinate all aspects of the funeral.

Despite those efforts, however, hundreds of people gathered outside the French hospital in the Jerusalem neighborhood of Sheikh Jarrah and shouted calls of incitement. A police officer who was at the scene warned the crowd using a loudspeaker that the officers would take action to enforce the law.

As the coffin left the hospital, Palestinian Arabs began throwing rocks towards the officers, who were forced to act to disperse the rioters.

The police said that "unfortunately, under the auspices of the funeral and while cynically and improperly exploiting it, hundreds of rioters began to disrupt public order, even before the funeral began." WATCH