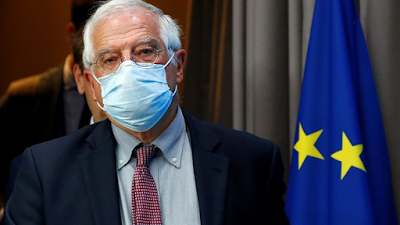 In a statement, Borell accused Israel of “disrespectful behavior” towards the participants in the funeral.

“The European Union is appalled by the scenes unfolding on Friday during the funeral procession of the American-Palestinian journalist Shireen Abu Aqleh in occupied East Jerusalem,” he said.

“The EU condemns the disproportionate use of force and the disrespectful behavior by the Israeli police against the participants of the mourning procession. Allowing for a peaceful farewell and letting mourners grieve in peace without harassment and humiliation, is the minimal human respect,” added Borrell.

“The EU reiterates its call for a thorough and independent investigation that clarifies all the circumstances of Shireen Abu Aqleh’s death that brings those responsible for her killing to justice,” he concluded.

Earlier on Friday, Israel was condemned by a host of US officials for the violence at the funeral, including by White House Press Secretary Jen Psaki.

“We have all seen those images, they’re obviously deeply disturbing. We regret the intrusion of what should have been a peaceful procession,” she told reporters.

Linda Thomas-Greenfield, the US Ambassador to the UN, tweeted, “Deeply distressed by the images from Shireen Abu Akleh’s funeral procession. The tragedy of her killing should be handled with the utmost respect, sobriety, and care.”

Later, US President Joe Biden was asked about the clashes and replied, “I do not know all the details about what happened at the funeral of Shireen Abu Aqleh, but I know that an investigation must be opened.”

The Israel Police explained on Friday evening that it had coordinated the funeral with Abu Aqleh’s family, and that a mob of about 300 rioters took her casket from the hospital aiganst the wishes of her family, forcing the officers to intervene.

“Israeli Police intervened to disperse the mob and prevent them from taking the coffin, so that the funeral could proceed as planned in accordance with the wishes of the family,” police said in a statement.

“During the riot that was instigated by the mob, glass bottles and other objects were thrown, resulting in the injury of both mourners and Police officers,” they added.