Senior officer: Thousands of bullets were fired at us, I've never seen anything like it 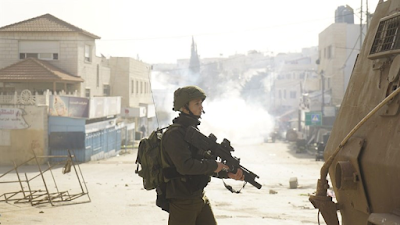 A senior officer in the IDF Central Command held a conversation with military reporters on Friday afternoon and spoke about the exchange of fire in the Jenin area earlier in the day, in which Noam Raz, an officer who served in the Yamam counterterrorism unit, was killed.

"More than three hours that felt like a pressure cooker, the amount of gunfire aimed at us was indescribable, thousands of bullets. We replaced four punctured tires, two protected vehicles were shut down, protected windshields were shattered," the officer said.

"I insisted on arresting the wanted terrorists in Jenin even though thousands of bullets were fired at us, because I knew the wanted people were at home," he said. "I have been in the army for more than 20 years and I have never seen anything like it."

Raz, he said, was hit by one bullet in the back as he was on his way out.

Raz was wounded after Arab terrorists opened fire on Israeli forces operating in Jenin Friday morning. The officer was airlifted to Rambam Hospital in Haifa for treatment, where he later succumbed to his wounds.

A resident of Kida, Raz enlisted in 1999 and served for about 23 years in the Yamam unit as a fighter, paramedic, breacher, and sniper. He is survived by his wife and six children.