Terrorists fire on troops as IDF raids Jenin and nearby towns 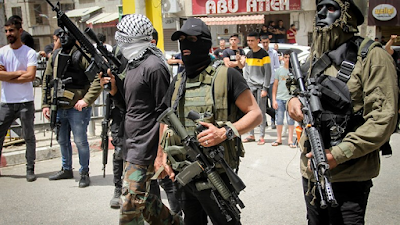 Israeli forces continued raiding towns and villages across PA-controlled territory in Judea and Samaria Friday morning, arresting at least two suspects and clashing with rioters in Bruqin and Jenin.

Most of the recent terror attacks in Israel have been carried out by terrorists from Jenin, considered a hotbed of terrorists activity.

PA sources reported that IDF forces fired anti-tank missiles at the residence of a wanted terrorist in the city. The soldiers had previously used a loudspeaker, telling the terrorist to vacate the building.

Jenin experienced the heaviest fighting in the 2002 Operation Defensive Shield, ordered by former Prime Minister Ariel Sharon, with 23 soldiers killed and another 75 wounded in the 10-day battle.

Footage of terrorists firing on IDF troops in the village of Bruqin and Jenin in Samaria as soldiers rounded up wanted terrorists in Friday's operation. WATCH