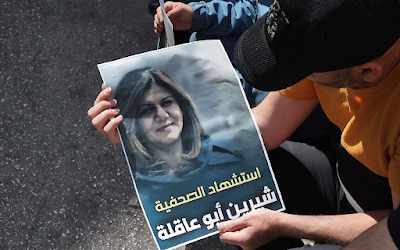 An expert said the death of a veteran Palestinian-American journalist during an Israeli military raid in the West Bank on Wednesday morning will radicalize potential terrorists, and will likely cause diplomatic damage to Israel, as the army scrambled to explain the incident.

“There are calls for revenge on social media now, and from here starts the need to thwart the next terror attack,” said Orit Perlov, a research fellow at the Institute for National Security Studies (INSS) who specializes in Palestinian social media.

Al-Jazeera correspondent Shireen Abu Akleh, 51, was shot dead in the West Bank city of Jenin as Israeli troops clashed with armed Palestinians. Israel has been cracking down on the area after a series of deadly terror attacks, some of them carried out by Palestinians from the Jenin area.

Investigations into wartime incidents can take months, and only hours have elapsed since the shooting. In the meantime, dueling videos drove the narrative about her death.

Footage on social media showed Abu Akleh lying on the ground, covered in blood, shortly after the sound of gunshots. She was wearing a blue press vest and helmet, clearly identifying herself as a journalist. A young Palestinian man was seen dragging her body from the scene, moments before she was declared dead. READ MORE