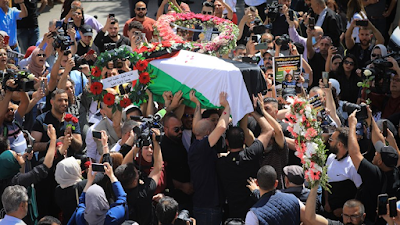 Protests were held on Thursday in several Arab cities throughout Israel, following the death of Al Jazeera reporter Shireen Abu Aqleh during clashes in Jenin.

In Umm al-Fahm, the demonstrators carried PLO flags and posters with captions calling Israel "the source of terrorism."

The demonstrators called for the execution of the collaborators and traitors and shouted about their willingness to sacrifice their lives in the fight for the land. "We will sacrifice our blood and souls for your sake, Palestine, for the sake of Al-Aqsa," they said.

"The blood of the martyrs asks my blood: Why do you want the solution in a peaceful way?" the protesters shouted.

The demonstrators also stressed the connection between "all the Palestinian territories from the heroic Jenin to Gaza", reiterated the message that Israel is a "state of terror" and the "mother of terrorism" and expressed support for terrorists, to whom they referred as "prisoners of liberty".

On Thursday, top PA official Hussein Al-Sheikh announced that the Palestinians have rejected the Israeli request to hold a joint investigation into the death of Abu Aqleh.