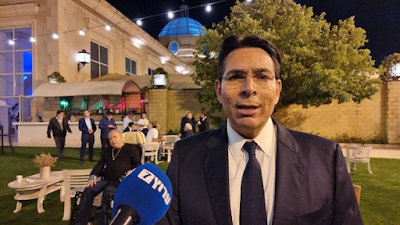 Ambassador Danny Danon, Chairman, World Likud and Israel's former UN Ambassador to the United Nations, has slammed the Palestinian Authority (PA) for refusing to cooperate with Israel on the investigation of an Al Jazeera journalist's death.

"It is astounding that instead of calling for a joint and transparent investigation between Israel and the Palestinian Authority to uncover the truth of the recent incident, there is an immediate and collective rush to denounce Israel without any supporting evidence," Danon said.

"The fact that the PA refuses to cooperate in an investigation seems to be of no consequence, nor cause any outcry. This is sad and shocking but not surprising."

He added, "The 'blame Israel for everything game' serves the biased narrative of these elected officials and media outlets. They should be ashamed of themselves for their misrepresentation and distortion of the truth in this tragic situation."

On Wednesday morning, Shireen Abu Aqleh – a reporter for the Qatar-based Al Jazeera network – died after being shot in the head during a firefight in Jenin. The PA rushed to blame the IDF for the killing, although the IDF's shots were fired directly at the terrorists, while the terrorists were firing carelessly in multiple directions.

Though the IDF and the Israeli government expressed willingness to work with the Palestinian Authority to uncover the truth of the matter, and the IDF began its investigation into Aqleh's death immediately, the PA is refusing to turn over the bullet which killed her and has flat-out refused to cooperate on a joint investigation.