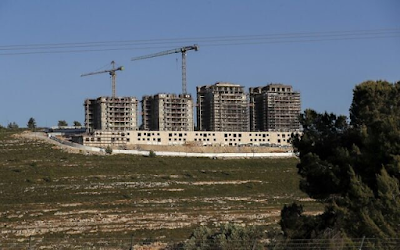 All 25 plans on the docket were advanced by the Civil Administration’s High Planning Subcommittee. More than half of the homes got the final approval for their construction.

While some of the projects are for settlements located close to the Green Line, other plans that were approved are for settlements deep in the West Bank. These include a project for 56 homes in Negohot, which is advanced through the earlier planning stage known as deposit, and a project for 534 homes in Shevut Rachel, which is advanced through the final planning stage

In addition to adding thousands of new homes, the plans retroactively legalized the Mitzpeh Dani and Oz V’gaon outposts. The former is a wildcat neighborhood of the Ma’aleh Michmash settlement in the heart of the West Bank and the latter is a nature reserve and education center that was built following the kidnap and murder of Israeli teens Gil-ad Shaer, Eyal Yifrach and Naftali Fraenkel in a terror attack in the summer of 2014.

In a celebratory tweet responding to news of Mitzpeh Dani’s approval, Interior Minister Ayelet Shaked calls it a “holiday for the settlement movement.”