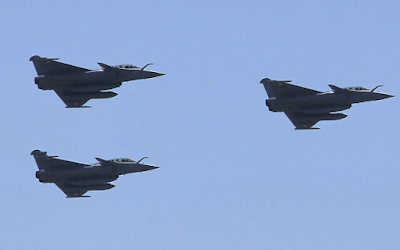 PARIS (AFP) — France has agreed to sell 30 more Rafale fighter jets to Egypt, a source close to the contract said on Monday, confirming an online report of a secret mega-defense deal.

Investigative site Disclose, citing confidential documents it had obtained, said the deal had been signed on April 26 at the behest of Egyptian President Abdel Fattah el-Sissi as part of defense contracts worth almost four billion euros ($4.8 billion).

It said that the deal consisted of three distinct contracts, by far the biggest being the 3.75-billion-euro ($5.52 billion) purchase of 30 Rafale fighter jets from French producer Dassault.

Two contracts were also given to MBDA and Safran Electronics and Defense, which both produce equipment for missiles. The total volume of the transactions was thus 3.95 billion euros ($4.76 billion), it said.

A source close to the contract, who asked not to be named, confirmed to AFP that Egypt had ordered 30 more fighter jets but did not give details on the cost. Contacted by AFP both the French defense ministry and Dassault declined to comment, but a government source, who asked not to be named, said: “Very advanced discussions have taken place with Egypt and the announcements could come very soon.”

Disclose said that the financial portion of the agreement was being inked on Monday, with Egypt getting a loan guaranteed by France to make the purchases.

France regards Egypt as a key client of its defense industry. Egypt was the first foreign country to purchase the Rafale jets in 2015, buying 24. Purchases by Qatar, India and Greece have turned the plane into one of France’s main defense industry successes.

Disclose noted that the deal came in the wake of a hugely contentious state visit to Paris by Sissi in December hosted by President Emmanuel Macron. Egypt and France have enjoyed an increasingly close relationship under the secular rule of former army general Sissi, with common interests in the Middle East and a shared suspicion of Turkish President Recep Tayyip Erdogan.

Macron decorated Sisi with France’s highest honor, the Grand Cross of the Legion of Honour, during the visit. That enraged activists who had asked him not to roll out the red carpet but instead to raise concern over the estimated 60,000 political prisoners languishing in Egyptian prisons.

The French president also ruled out making France’s deepening defense and trade ties with Egypt conditional on the issue of rights.

“I think it is more effective to have a policy of dialogue than a policy of boycott which would reduce the effectiveness of one of our partners in the fight against terrorism and for regional stability,” Macron said.