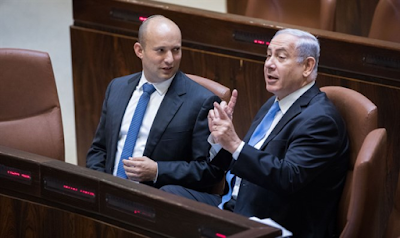 Prime Minister Benjamin Netanyahu is planning on forming a minority government based on a rotational agreement with Naftali Bennett, dividing up the premiership during the term, a senior Likud official said Sunday, according to a report by Yediot Aharonot.

Under the arrangement described by the Likud official, Netanyahu and Bennett would switch off as prime minister in the new government, with Bennett initially serving as premier.

However, officials from the opposition bloc committed to removing Netanyahu as prime minister said Sunday that Bennett has already vowed to pursue talks with Netanyahu’s rivals.

Bennett, the officials said, “promised to continue negotiations if he receives the mandate” to form a new government.

Netanyahu’s mandate to form a new government is set to expire Tuesday night, at which point President Reuven Rivlin will either hand the mandate to the Knesset, giving the legislature three weeks to vote for a new premier, or entrust another candidate with the task of forming a government.

The report comes after Defense Minister Benny Gantz (Blue and White) rejected claims that he is open to joining a new government with the Likud.

Speaking at a gathering of Blue and White party lawmakers Sunday afternoon, Gantz unequivocally rejected any possibility of working with Netanyahu towards forming a new government.

“Even if they’ll ask me a hundred more times, the answer will still be the same and clear – my door is absolutely closed to Netanyahu,” Gantz said. “I am totally and only committed to the change bloc.”