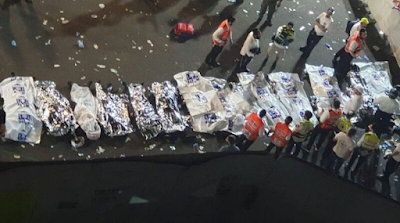 At least 44 dead and more than 150 injured in a stampede at Mt. Meron where more than 100,000 pilgrims were tightly packed for the Be’Omer celebration, Israel’s largest since the outbreak of coronavirus more than a year ago.   The collapse of a ramshackle platform may have caused the panicky flight.

Hundreds of Magen David paramedics rushed to the scene, while ambulances and helicopters evacuated the victims of what President Reuven Rivlin and Prime Minister Binyamin Netanyahu called a “terrible disaster,” calling for prayers for the injured. Thousands of police labored to clear the crowd and open the way for the ambulances and medical teams.. Rabbis and others used loudspeakers to exhort people in Yiddish and Hebrew to make way and calm down.

The IDF’s Homeland Command, Air Force helicopters and rescue teams were pressed into service to help rush the scores of victims to the nearest hospitals, Rambam in Haifa, Ziv in Safed and Poriah in Tiberias. Evacuations continued during the night. Frantic families were going around the hospitals Friday morning looking at photos taken of the victims to identify their loved ones.