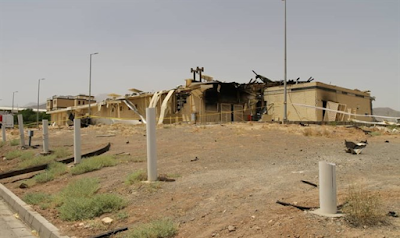 Israeli Prime Minister Binyamin Netanyahu on Monday held a meeting to determine Israel's policy regarding the US intention to return to the "Iran deal."

According to Israel Hayom, the meeting lasted for three hours, and ended with several tactical decisions. It is expected that Netanyahu will call another meeting soon.

Israel strongly opposes the Biden administration's intention to rejoin the deal, and believes that only an existential threat will convince the Iranian regime to give up its nuclear ambitions. The US, meanwhile, claims that diplomacy will bring better results.

Meanwhile, Israel hopes that Iran's progress towards a nuclear weapon and continued obstinance with regards to the terms of the deal will prevent the US from rejoining.

"Just like [Palestinian Authority Chairman] Mahmoud Abbas' stubbornness saved Israel from dangerous compromises on Judea and Samaria, so, too, maybe Iran's outrageous demands for compensation from the US will prevent agreements between the sides, and the harsh sanctions will remain in effect," an Israeli source involved in the issue told Israel Hayom.

On Sunday, US Secretary of State Anthony Blinken said:

"The United States remains committed to ensuring that Iran never acquires a nuclear weapon. Diplomacy is the best path to achieve that goal."

"Working with allies and partners, we will also seek to lengthen and strengthen the JCPOA (Joint Comprehensive Plan of Action) and address other areas of concern, including Iran’s destabilizing regional behavior and ballistic missile development and proliferation."