Blinken to Ashkenazi: Two-state solution is the best way to ensure Israel’s future 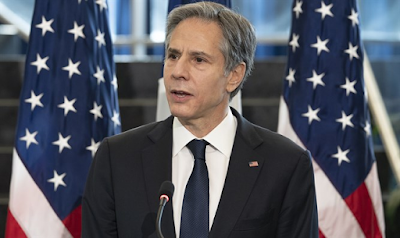 US Secretary of State Antony Blinken on Monday spoke to Foreign Minister Gabi Ashkenazi and told him the US believes in a two-state solution to solve the Israel-Palestinian Arab conflict.

"The Biden Administration's believes the two-state solution is the best way to ensure Israel’s future as a Jewish and democratic state, living in peace alongside a viable and democratic Palestinian state," Blinken told Ashkenazi during the call, according to the State Department.

Blinken tweeted about the conversation, writing, “Great speaking with Gabi Ashkenazi today to discuss our partnership, regional challenges, and Israel’s efforts to combat the COVID-19 pandemic. The United States remains unwavering in its commitment to Israel’s security.”

While former President Donald Trump said he thought the two-state solution “works best”, he also said he would be comfortable with what the sides ultimately decide on.

Trump last year unveiled his so-called “Deal of the Century” peace plan, which PA chairman Mahmoud Abbas was quick to reject, saying it would be relegated to the "dustbin of history."

Past efforts under the Obama Administration to broker a peace agreement failed in 2014 when the PA unilaterally applied to join international organizations in breach of the conditions of the talks.