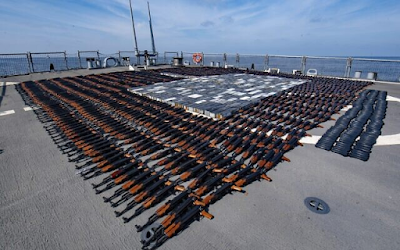 Yemen has been wracked by civil war since 2014, pitting Iran-backed Houthi rebels against the internationally recognized government.

The UN imposed an arms embargo on the Houthis in 2015.

The United States and ally Saudi Arabia — which leads the military coalition backing the Yemeni government — have long accused Iran of supplying the Houthis with weapons, a charge Tehran denies.

Citing a confidential report by a UN Security Council panel of experts on Yemen, the Journal wrote that boats and land transport were used to smuggle weapons made in Russia, China and Iran into Yemen. READ MORE