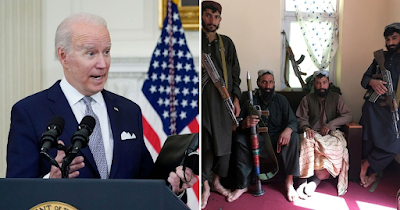 Remember how, after the fall of Kabul, we were promised Taliban 2.0? It was going to be a softer, gentler theocracy — one which was going to include a multitude of voices in government and which definitely wouldn’t be embracing terrorism like it did during its first tenure running the country of Afghanistan.

Yes, well, about that: A report states the group, currently the de facto government of Afghanistan, has now threatened to send 2,000 suicide bombers to Washington, D.C. And yet, there’s nary a peep out of President Joe Biden’s administration.

It’s not that we couldn’t have seen this coming. Since the Biden administration’s capitulation in Afghanistan this summer, the Taliban has made it clear through their actions they’re still the same extremists they were when we chased them from power. The Western Journal has been bringing readers the truth about just how bad the situation in Afghanistan is — and why the president is directly responsible. You can help us bring America the facts by subscribing today.

The suicide-bombing threat was first reported by the Middle East Media Research Institute, or MEMRI, a watchdog which keeps an eye on communications from extremist groups and media sources.

According to a December report, during ongoing talks in Doha, Qatar — where the Taliban government seeks international recognition — Maulvi Mohammad Yaqoob Mujahid, Afghanistan’s acting defense minister, said that if America wanted troops in Afghanistan to reopen its embassy there, the Taliban wanted an equivalent number of terrorists in our capital. READ MORE