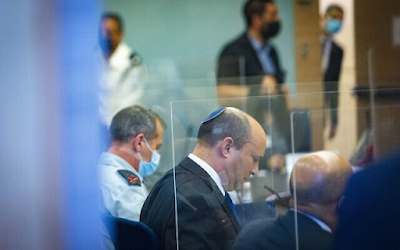 Bennett told lawmakers that Israel’s economic growth was enabling it to prepare for such scenarios in parallel with the focus on the strategic shift vis-à-vis Iran, according to the Ynet news site, which reported comments made during the part of the discussion that was closed to the media.

The premier reportedly said Israel was waging a multifaceted war against Iran and its proxy terror groups in the region — including Lebanon’s Hezbollah and Gaza’s Hamas — adding that while Tehran is regarded as a regional power, it has many weaknesses, including having to invest its resources in controlling its own population and in transferring money to its proxies.

Israel last fought Hamas in May in a deadly 11-day escalation, and has had several cross-border incidents with Hezbollah, with which it last fought a full-blown war in 2006.