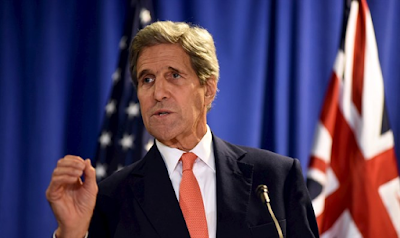 An independently analyzed translation of the leaked audiotape of Iranian Foreign Minister Javad Zarif shows that he was unaware of secret Israeli airstrikes until former Secretary of State John Kerry gave him the information.

These new details are in direct contradiction to claims by the State Department in defense of Kerry that the information was no longer classified and already in the public domain at the time of his conversation with Zarif, reported the Washington Free Beacon, who paid for an independent translation of the audiotape.

In the tape, Zarif can be heard saying, “Kerry told me that Israel had launched 200 airstrikes against (Iran).”

"You didn't know?" asked the interviewer.

At a Monday press conference, State Department spokesperson Ned Price appeared to contradict what is on the tape.

"If you go back and look at press reporting from the time, this certainly was not secret, and governments that were involved were speaking to this publicly on the record," he said.

Also, the next day Secretary of State Anthony Blinken called the allegations “utter nonsense” and said that the strikes had already been reported in the media. He accused Republicans of trying to "play politics with this,” according to the Washington Free Beacon.

Republicans have been calling for Kerry to resign or be fired from his current White House job as Biden’s climate envoy.

“The allegation that John Kerry told his Iranian pal Foreign Minister Zarif that Israel attacked Iranian interests 200 times is deeply concerning and there needs to be a serious investigation,” Senator Ted Cruz (R-TX) said in a tweet. “If it’s true, and Joe Biden were a real leader, he should fire John Kerry.”