Buried alive: ‘I thought I was going to die,’ says teen injured in Meron tragedy 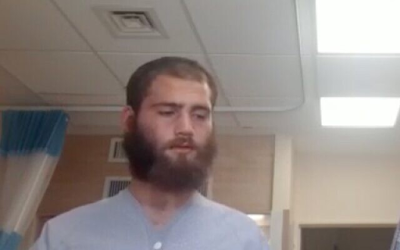 A teenager who was trapped beneath a pile of people at the Mount Meron tragedy described how he thought he was going to die as people around him were crushed to death.

Shachar Ba’al Haness, 19, was brought to Galilee Medical Center after being injured during Lag B’Omer festival celebrations when overcrowding on a bottleneck exit route led to a disaster in which at least 45 people died and over 150 were injured, many critically.

Ba’al Haness told The Times of Israel he was in the midst of a moving crowd of people when the situation went out of control.

“Everyone was moving in one direction,” Ba’al Haness said, and described how pushing started and people began falling over, causing even more of the crowd to lose their balance.

He was knocked to the floor as others piled up on top of him.

In the ensuing crush, he remained conscious even as others apparently died around him.

“I thought I was going to die,” Ba’al Haness said, explaining that he was left struggling to breathe for around five minutes, buried in the mass of bodies. In what he thought were his final moments, the religious teenager said he prayed to God.

Eventually, police reached him and began pulling people out from on top of him.

Ba’al Haness said he was eventually brought out to a military vehicle to be taken away from treatment.

“There I saw all the people that the paramedics were fighting to save their lives,” he said.

Despite the enormity of the tragedy and his brush with death, Ba’al Haness said he doesn’t blame organizers or authorities for what happened.

“We need to move on, I saw what I saw,” he said, and added that only time will tell how he will psychologically deal with the experience.

Ba’al Haness said he was expecting to be released home before the end of the day. READ MORE