Jordan: The Temple Mount belongs to Muslims only 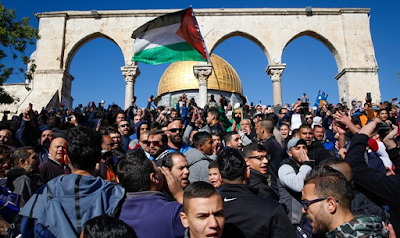 The Jordanian Foreign Ministry on Monday sent an official protest memorandum to Israel demanding that it stop what it defined as "the provocations in the Al-Aqsa Mosque" and respect the historical and legal status quo and authority of the Waqf.

The ministry condemned Israel for permitting "extremists to enter the mosque under Israeli security for the last ten days of Ramadan."

Dhaifallah Al-Fayez, spokesman for the Jordanian Foreign Ministry, called Israel's actions in Jerusalem "a blatant violation of the historical and legal status quo, international law and the obligations of Israel, the occupying power, in East Jerusalem and the sanctity of the Al-Aqsa Mosque and the sanctity of Ramadan."

Al-Fayez emphasized that the Al-Aqsa Mosque and its entire area of ​​144 dunams is a place of worship for Muslims only, and that the Jordanian Waqf has the sole authority to manage all the affairs of the mosque and regulate entry in accordance with international law and the historical and legal situation.

The Temple Mount was left in the hands of the Waqf following Jerusalem’s reunification in 1967, a decision of then-Defense Minister Moshe Dayan. The Waqf has taken advantage of this and removed every sign of ancient Jewish presence at the most Jewish holy site.

Police, in an attempt to appease the Waqf, discriminate against Jews. They limit the number of Jewish worshippers allowed on the Temple Mount at one time in order to prevent conflict with Muslim worshippers. They often close the Mount to Jews in response to Muslim riots – despite evidence that Muslim riots have been planned in advance for the specific purpose of forcing Jews out.