Iranian nuclear negotiator: Sanctions on oil, banks and most individuals will be lifted 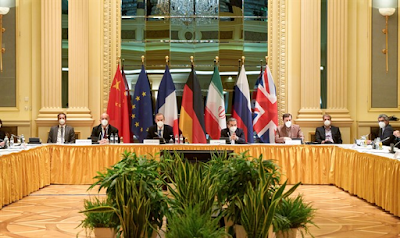 Iran’s chief nuclear negotiator said on Saturday that Tehran expects US sanctions on oil, banks and most individuals and institutions to be lifted based on agreements so far in Vienna talks, Reuters reported.

"Sanctions ... on Iran's energy sector, which include oil and gas, or those on the automotive industry, financial, banking and port sanctions, all should be lifted based on agreements reached so far," Deputy Foreign Minister Abbas Araqchi was quoted as saying by Iranian state media.

Araqchi did not say under which mechanism sanctions would be lifted or refer to how Tehran would meet Washington's demands and return to its commitments under the deal.

"We will negotiate until the two sides' positions come closer and our demands are met," he added. "If they are met there will be an agreement, if not there will naturally be no agreement."

Asked to comment, the US State Department referred back to past statements, including remarks on Friday by US national security adviser Jake Sullivan, who said the talks were in “an unclear place.”

The State Department also referred to remarks by State Department spokesman Ned Price on Thursday, when he said the sides were "not on the cusp of any breakthrough" and there was "a potentially long road ahead."

It has continued to do so even as current US President Joe Biden has indicated a desire to return to the deal.

The talks in Vienna involved diplomats from Britain, China, France, Germany, Iran and Russia who met the Iranian representatives, while US diplomats participated indirectly in the talks from a nearby hotel.

The US and European Union both said recently that more work was needed to revive the 2015 deal, while Iranian President Hassan Rouhani said the "negotiations have achieved 60-70 percent progress."