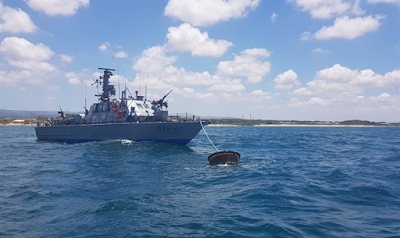 An Israeli navy vessel opened fire on an unidentified boat which approached it off the Gaza coast.

The IDF reported that the navy ship encountered a “potential threat” while operating off the coast of Khan Yunis in the southern Gaza Strip Monday morning, adding that the navy vessel “thwarted the threat”.

“Earlier today, our troops spotted suspicious naval activity in the maritime zone along the Gaza Strip which posed a potential threat to Israeli Navy vessels,” an IDF spokesperson said in a statement.

“We identified and thwarted the threat and will continue to operate against all threats, both on land and at sea.”

There are conflicting reports as to the fate of the unidentified vessel which approached the Israeli naval ship.

According to a report by the Shehab outlet, Israeli forces sank the vessel.

WAFA, however, reported that the Israeli vessel fired “two shells at a Palestinian fishing boat,” adding that “the fishermen…were not hurt” and later returned to the Gaza Strip.