Netanyahu: 'I don't suggest that anyone test the IDF or Israel' 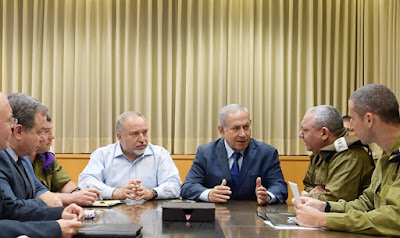 Prime Minister Binyamin Netanyahu said Tuesday that Israel would use force to prevent terrorists in southern Lebanon from carrying out cross-border attacks on targets in northern Israel.
Prime Minister Netanyahu held a security assessment and briefing with IDF Chief-of-Staff Lt.-Gen. Aviv Kochavi, GOC Northern Command Maj.-Gen. Amir Baram, GOC Intelligence Maj.-Gen. Tamir Hayman, GOCOperations Maj.-Gen. Aharon Haliva and other senior officials at IDF Northern Command headquarters.
During the meeting, Netanyahu discussed the incident on the Israel-Lebanon border Monday, in which IDF forces opened fire on Hezbollah positions in southern Lebanon after a group of armed men were spotted attempting to cross into Israeli territory.
“Yesterday’s action was important; it thwarted an infiltration into our territory. Everything happening now is the result of the effort by Iran and its Lebanese proxies to entrench militarily in our region. Nasrallah is serving this Iranian interest at Lebanon’s expense," said Netanyahu.
"I do not suggest that anybody try the IDF or the State of Israel. We are determined to defend ourselves.”
“I am impressed that the IDF is well prepared for every possible scenario. We will continue to take action to thwart Iran’s military entrenchment in our region. We will do whatever is necessary to defend ourselves and I suggest that Hezbollah consider this simple fact. Israel is ready for any scenario.”
Lebanon's Prime Minister, Hassan Diab, slammed Israel Tuesday over the incident a day earlier.
"Israel has once again violated Lebanon's sovereignty... in a dangerous military escalation," Hassan Diab said on Twitter, in his government's first official response to Monday's shelling.
"I call for caution in the coming days because I fear that things will get worse in light of severe tension at the border," he added.
Posted by Bill Salus at 5:04:00 AM