Netanyahu: We are in midst of serious security incident 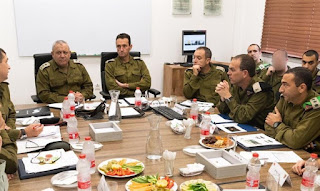 Prime Minister Binyamin Netanyahu left the weekly Likud faction meeting early in response to a security incident on the northern border Monday afternoon.
Before leaving the meeting, Netanyahu said IDF forces were involved in "a serious security incident."
The Prime Minister attended a consultation with security officials regarding the ongoing situation.
Earlier in the faction meeting, Netanyahu addressed increased security tensions on the northern border.
"Our policy is clear. We will not allow Iran to become entrenched militarily on our border with Syria. This is the policy I established years ago, and we will strictly adhere to it. Second, Lebanon and Hezbollah will be held responsible for any attack against us originating from Lebanon. Third, the IDF is prepared for any scenario. We are working in all arenas to ensure Israel's safety - close to our borders as well as far away from them," he said.
Posted by Bill Salus at 5:13:00 AM