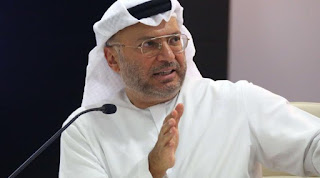 Any unilateral Israeli move towards annexing parts of the occupied West Bank would be a “serious setback” for Middle East peace, the Emirati minister of state for foreign affairs Anwar Gargash tweeted on Monday, June 1. It would also “undermine Palestinian self-determination and constitute a rejection of the international and Arab consensus on stability and peace,” he said. “The talk of annexing Palestinian lands must stop.”
DEBKAfile: The Arab Gulf rulers have never directly rejected President Donald Trump’s Middle East peace plan, although it was interpreted by PM Binyamin Netanyahu as a green light for extending Israel sovereignty to parts of the West Bank and the Jordan Valley. On Monday, the prime minister declared his resolve to launch discussions on this measure in the cabinet and Knesset after July 1, as stipulated in his unity government deal with Benny Gantz.
The United Arab Emirates minister’s denunciation of this step is seen as addressed to the Trump administration even more than Jerusalem and is expected to galvanize more leading Arab officials to add their voices.
Posted by Bill Salus at 5:09:00 AM