Pompeo on Iran: Time is ticking 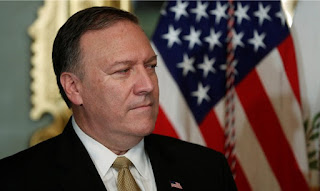 US Secretary of State Mike Pompeo on Monday urged the international community to take action against Iran’s support for terrorism.
In a statement, Pompeo noted that international agreements restricting Iran will end in 15 months.
“The Islamic regime in Iran is the world’s leading state sponsor of terror. For over 40 years their malign behavior and support for terrorist proxies has spread uncurbed. The
implementation of the JCPOA, informally known as the ‘2015 Iran Nuclear Deal’ has placed even more resources and money at the regime’s disposal, furthering the reach and aggression of their malign activities. This is why the United States left the JCPOA and implemented decisive sanctions to curb the regime’s ability to fund terror,” said Pompeo.
“However, time is running out on international agreements restraining the Iranian regime. For example, the head of the brutal Islamic Revolutionary Guard Corps, Qasem Soleimani, will be allowed to travel on October 18, 2020. Soon after, the Iranian regime will also be free to sell weapons to anyone, including terrorist proxies, and countries like Russia and China will be able to sell the Iranian regime tanks, missiles, and air defense equipment. This could start a new arms race in the Middle East and further destabilize the region and the world,” he warned.
“The international community must stand together against the Iranian regime’s support for terror. Time is ticking,” concluded Pompeo.
US President Donald Trump withdrew from the 2015 nuclear deal in May of 2018. He has described the deal as “the worst deal ever negotiated”.
The US has since imposed two rounds of sanctions on Iran, the latest of which went into effect in November.
The European signatories to the deal did not agree with Trump’s decision to leave the agreement and have been trying to save the accord, which they see as crucial to forestalling an Iranian nuclear weapon.
At the same time, some countries have expressed concern over Iran’s ballistic missile program which was not covered in the 2015 deal.
Posted by Bill Salus at 5:36:00 AM