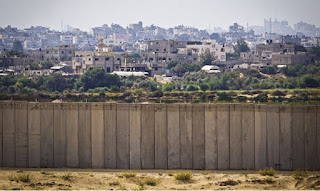 Israel’s defense establishment has decided to build another barrier in the Gaza envelope, this time a security wall against infiltration of terrorists into towns and communities located near the Gaza border.
According to a report Monday on Channel 12 News, the wall will be six meters high and nine kilometers in length. It will run adjacent to localities in the Gaza envelope and along Highway 34 between Yad Mordechai and Nahal Oz.
The wall is supposed to be another barrier in the space between the Gaza border and the localities, which should delay terrorists during an attempted infiltration if they are able to cross the border on their way to carry out an attack.
The cost of the project is tens of millions of shekels. Discussions are taking place between the Ministry of Defense and the Prime Minister's Office, focusing on finding a budget source for the construction of the wall.
Posted by Bill Salus at 5:25:00 AM