Greenblatt: Trump hasn't yet decided when to unveil peace plan 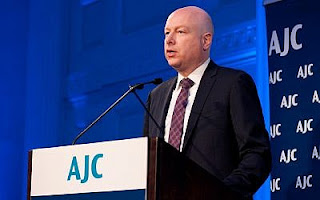 US President Donald Trump has not yet decided whether to unveil his Middle East peace plan before or after Israeli elections set for next month, US special envoy Jason Greenblatt told Bloomberg Television in an interview on Monday.
Greenblatt also said that the US hopes eventually to engage with the Palestinian Authority on an accord, even though it has been boycotting the Trump administration ever since he recognized Jerusalem as Israel’s capital.
Greenblatt, who along with Trump’s son-in-law and senior adviser Jared Kushner has been drafting a Middle East peace proposal for the last two years, said the US isn’t looking for regime change with the PA. At the same time, he signaled the US would continue to avoid any dealings with Hamas, the terrorist group that rules the Gaza Strip.
“We are not looking for a regime change, President [Mahmoud] Abbas is the leader of the Palestinians, so we hope that he will be able to come to the table,” he told Bloomberg Television.
“We do hope to have continued engagement or an eventual re-engagement with the Palestinian Authority.”
Greenblatt gave no indication of what the political plan would look like, but said Trump would have to “decide soon” whether to roll it out before the Israeli elections on September 17 or after -- and whether to wait until after a new government has been formed.
“This conflict will only be resolved by direct negotiations between the parties,” Greenblatt stressed. “It’s not for the United States or the European Union or the United Nations to demand how this conflict can be resolved.”
The peace initiative, partially unveiled at a Bahrain conference in June, dangled the prospect of pumping $50 billion-worth of investment into the Palestinian Authority economy.
Little is known about the political component of the peace plan, but Kushner indicated in April that the plan would not focus on the two-state solution.
The PA has rejected the US peace plan before it has even been unveiled, claiming it is biased in Israel’s favor.
Posted by Bill Salus at 5:39:00 AM