At the southern tip of the Red Sea, Iran poses a direct threat to Israel 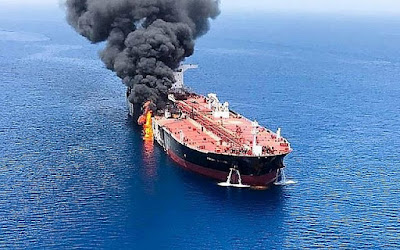 As Iran seeks to intimidate its way out of US-led economic sanctions, including by seizing tankers in the Strait of Hormuz, a top Israeli expert has warned that Israel would be immensely vulnerable if Tehran extends this tactic to a second strategic waterway.
Prof. Shaul Chorev, a rear admiral (ret.) who heads the Maritime Policy & Strategic Research Center at the University of Haifa, noted that last August, Yemen’s Iran-aligned Houthi rebels attacked two Saudi oil tankers in the Bab al-Mandab strait at the southern entrance to the Red Sea. That incident prompted Prime Minister Benjamin Netanyahu to directly warn Iran against seeking to block the strait, and promise that Israel and a “determined international coalition” would prevent this.
A full third of Israel’s global trade is with the Far East, Chorev noted, billions of dollars’ worth of Israeli imports and exports pass through Bab al-Mandab, and Israel thus “needs to worry” about what plays out there. In a recent strategic overview produced by his maritime research center, he urged that Israel formulate an overall strategy to face up to the threat “via a naval coalition with Western forces that operate in the area, or independently.”
Israel doesn’t sail to the Strait of Hormuz, Chorev, a former navy commander of submarines and missile boats, noted in our interview (although Foreign Minister Israel Katz reportedly said Tuesday that Israel is involved in a US-led naval mission to provide maritime security there, drawing a stream of Iranian threats). It does, however, sail through Bab al-Mandab, noted Chorev, “and we are vulnerable there.” Iran “can directly target us.”
Chorev, 72, who from 2007 until 2015 served as the director-general of the Israel Atomic Energy Commission, also warned in a candid and wide-ranging interview that the UN’s nuclear watchdog, the International Atomic Energy Agency, is not capable of thwarting any country’s covert nuclear weapons program, that a nation determined to achieve nuclear weapons will get there, and that there can be no certainty that Iran does not already have the bomb. READ MORE
Posted by Bill Salus at 5:44:00 AM