Before election, PM aims for Trump backing for Israel sovereignty at settlements 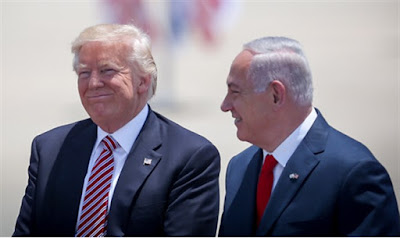 Prime Minister Benjamin Netanyahu is seeking a public declaration from US President Donald Trump ahead of the September elections backing an Israeli move to extend its sovereignty over Jewish settlements in the West Bank, officials in the Prime Minister’s Office told Zman Yisrael, The Times of Israel’s Hebrew-language site, on Sunday.
While Netanyahu cannot himself take the far-reaching diplomatic step of extending Israeli sovereignty to the settlements while he is leading the current caretaker government, the Prime Minister’s Office is lobbying for public support from Trump for such a move. This would enable Netanyahu to credibly assure right-wing voters that he can and will move quickly to apply sovereignty to the settlements if he is again elected premier.
If issued, such a declaration by Trump would mark the third far-reaching diplomatic shift by the White House in under two years, after Trump recognized Jerusalem as Israel’s capital in 2017 and moved its embassy there, and recognized Israeli control over the Golan Heights earlier this year, shortly before the previous elections.
An official in the Prime Minister’s Office on Monday told The Times of Israel that the claim that Netanyahu had asked for an US affirmation of Israel’s right to sovereignty in the West Bank is “incorrect.”
During his election campaign in April, Netanyahu pledged to gradually annex West Bank Jewish settlements, a move long backed by nearly all lawmakers in his alliance of right-wing and religious parties, and said he hoped to do so with US support. READ MORE
Posted by Bill Salus at 5:47:00 AM