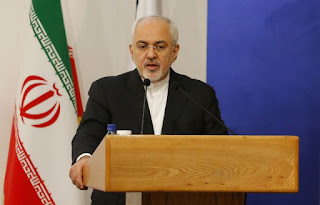 Iranian Foreign Minister Mohammad Javad Zarif on Sunday commented on the riots which broke out on the Temple Mount when Muslim worshipers clashed with police officers in an attempt to prevent Jews from visiting the holy site on Tisha B’Av, the anniversary of the destruction of the first and second Holy Temple.
Zarif posted a photo from the riots on Twitter and wrote, “The crime shown in this photo was but one perpetrated on Al-AQSA this morning—on our holy day.”
“The same terrorists are hoping to impose #HumiliationoftheCentury on Palestinians. We Muslims have power to end this tyranny, but only if we unite,” he added, in what appeared to be a reference to the US administration’s peace plan for Israel and the Palestinian Authority, which has come to be known as the “Deal of the Century”.
Iran's Supreme Leader, Ayatollah Ali Khamenei, on Saturday blasted the Trump administration’s peace plan as well, and called on all Muslims to support the Palestinian people in their opposition to it.
In a letter marking the Islamic hajj pilgrimage, Khamenei said the still-unreleased US plan was a "ruse" that's "doomed to failure." He also called for "active participation" in efforts to block the US plan.
US Secretary of State Mike Pompeo later mocked Khamenei for what he called his “faux concern” for residents of the Palestinian Authority.
“It’s sick that on the eve of Tisha B’Av – a solemn day for the Jewish people – Khamenei calls for violence against the Jewish state,” Pompeo tweeted.
“Khamenei’s faux concern for the Palestinian people runs so deep that under his reign of terror he provided less than $20,000 in aid since 2008, while sending millions to Hamas & other terrorists. In contrast, U.S. provided $6.3 billion in support to Palestinians since 1994,” he added.
Posted by Bill Salus at 5:38:00 AM