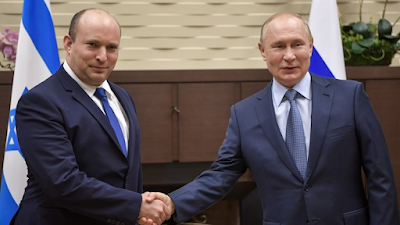 Israeli Prime Minister Naftali Bennett on Thursday spoke with Russian President Vladimir Putin about the nuclear talks in Vienna, Austria, and the possible return to a nuclear agreement with Iran.

The conversation was good; Bennett stressed the importance of a strong and determined stance against Iran’s progress in the nuclear project.

The two also leaders discussed a number of issues, primarily matters of regional security. The two agreed on continued close cooperation in this area.

The Prime Minister and the President also discussed security challenges in the global arena.

In addition, Bennett wished Putin a happy New Year, and President Putin invited Bennett and his wife to visit St. Petersburg, following his invitation during the Prime Minister's visit to Sochi. Bennett replied that he and his wife would be pleased to pay the visit.