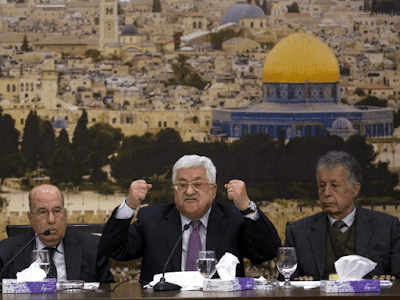 Palestinian Authority (PA) chairman Mahmoud Abbas warned on Friday that measures will be taken against Israel and the United States if Israel implements its plan to apply sovereignty over parts of Judea and Samaria.
Abbas' warning was made during a meeting he chaired at his office in Ramallah for the Palestine Liberation Organization (PLO) Executive Committee.
"As soon as Israel announces that it adopts the annexation plan, we will take the proper measures, which will not be against Israel alone, but also against America," said Abbas, according to the Xinhua news agency.
Abbas did not detail what are the measures that will be taken, but renewed his rejection of the US peace plan, also known as the “Deal of the Century”.
The PA is angry over the coalition agreement between Prime Minister Binyamin Netanyahu and Blue and White chairman Benny Gantz, which states that the government could apply sovereignty to parts of Judea and Samaria this coming July.
Earlier this week, Abbas threatened to cancel all agreements signed with Israel if it annexes any part of Judea and Samaria.
The PA has also taken issue with the US administration’s apparent support for the Israeli move.
On Wednesday, US Ambassador to Israel David Friedman told the Israel Hayom newspaper in an interview that the application of Israeli sovereignty to those areas of Judea and Samaria designated for Israel under the Trump administration’s Middle East peace plan could happen as soon as the mapping process has been completed in the coming weeks.
Friedman also laid out the Trump administration’s terms for accepting Israeli sovereignty, emphasizing that the terms remained the same as those noted in the peace plan: the mapping out of the areas to be placed under sovereignty, Israel’s commitment to leave the door open to good-faith negotiations with the Palestinian Authority for a period of four years, and a partial freeze on the expansion of 15 Israeli towns outside of the major blocs.
Abbas’ spokesman, Nabil Abu Rudeineh, later blasted Friedman and said, "Neither Israel nor the US has any right or legitimacy to take steps that violate the international law and resolutions.”
He also threatened to take "serious steps in response to the declaration of the annexation by Israel."
In addition, the PA “justice minister” threatened the US with lawsuits over its support for Israel’s sovereignty plan.
Posted by Bill Salus at 5:44:00 AM