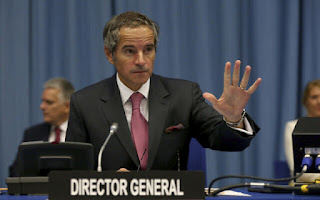 The head of the UN’s nuclear watchdog said Monday that there were “weeks” left to salvage the nuclear deal with Iran.

Rafael Grossi, director of the International Atomic Energy Agency, said at the Reuters Next conference that Tehran was advancing “quite rapidly” toward enriching uranium to 20 percent, as it has announced it would, in breach of the accord. He said the IAEA has assessed Iran will be able to produce some 10 kilograms a month.

“It is clear that we don’t have many months ahead of us [to save the deal]. We have rather weeks,” he said. If talks between the signatories of the accord are launched, “there will have to be a clear understanding on how the initial terms and provisions of the [nuclear deal] are going to be recomplied with,” Grossi said.

The comments came two days after Iranian lawmaker Ahmad Amirabadi Farahani declared that Tehran would expel IAEA inspectors in February unless the US lifts its sanctions on the country. (Read More)