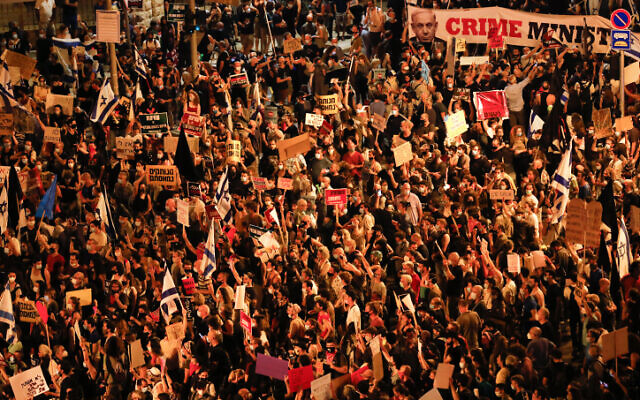 Police were preparing Thursday for mass rallies planned for Thursday and Saturday evenings outside Prime Minister Benjamin Netanyahu’s official residence in Jerusalem, the latest in a series of anti-government protests that have increasingly set the stage for violence.
Police are preparing to deploy in large numbers, officials said. Among other measures, police are to place more undercover officers amid the protesters, use more technology to monitor certain activists, and mobilize more officers to oppose violence against the protesters.
Protesters have for weeks been holding regular rallies outside the residence on Balfour Street, as well as in Tel Aviv, calling on the premier to resign due to his indictment on corruption charges. They have been joined in recent weeks by people protesting the government’s economic policies during the coronavirus pandemic.
Protesters have alleged violence by police on multiple occasions, as well as by right-wing counter-protesters, including attacks by extremists at the end of a protest in Tel Aviv that sent several demonstrators to the hospital. There have also allegedly been instances of vandalism and violence by protesters against cops.
Acting Police Commissioner Motti Cohen said Thursday morning that security forces would allow the protests, but would counter “violence in any form, against protesters, civilians and police,” adding: “We will take determined action to the full extent of the law against those who disrupt public order.” 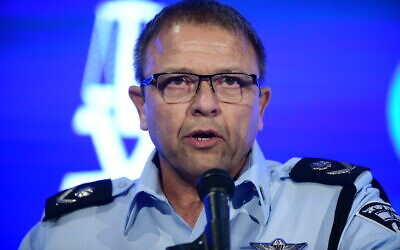 Acting Israel Police Chief Motti Cohen speaks at the annual Justice Conference in Airport City, outside Tel Aviv, on September 3, 2019. (Tomer Neuberg/Flash90)
“Even in this complex period we will grant every citizen the freedom to protest,” he added. “Most of the public is protesting in accordance with the law and as the police we must guarantee their rights are upheld.”
Cohen stressed that “the police isn’t a political body, it is free from ulterior motives and acts for the benefit of the entire public.” READ MORE
Posted by Bill Salus at 5:59:00 AM