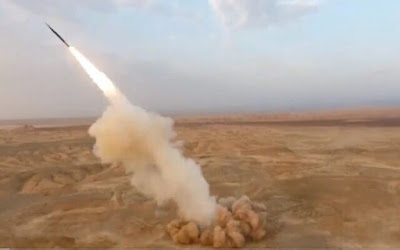 TEHRAN, Iran (AP) — Iran’s paramilitary Revolutionary Guard launched underground ballistic missiles for the first time, as part of an exercise involving a mock-up aircraft carrier in the Strait of Hormuz, state television reported Wednesday.
It was the latest barrage in a drill that the previous day saw two American bases temporarily go on alert over the launches.
Drone footage captured by the Guard showed two missiles blasting out from covered positions in what appeared to be a desert plateau in central Iran, with debris flying up in the air in their wake.
The launches took place on Wednesday, said Gen. Amir Ali Hajizadeh, the head of the Guard’s aerospace division. He told state television it was first time the Guard had done this, though the paramilitary force is known to have vast underground bases hiding its ballistic missile arsenal. READ MORE