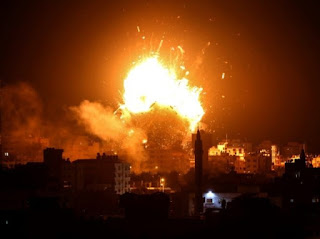 DUBAI, United Arab Emirates (AP) — An explosion that rattled Iran’s capital came from an area in its eastern mountains that analysts believe hides an underground tunnel system and missile production sites, satellite photographs showed Saturday.
What exploded in the incident early Friday that sent a massive fireball into the sky near Tehran remains unclear, as does the cause of the blast. The Fars news agency, which is close to the country’s ultra-conservatives, initially reported that the blast was caused by “an industrial gas tank explosion” near a facility belonging to the defense ministry. It cited an “informed source” and said the site of the incident was not related to the military.
The unusual response of the Iranian government in the aftermath of the explosion, however, underscores the sensitive nature of an area near where international inspectors believe the Islamic Republic conducted high-explosive tests two decades ago for nuclear weapon triggers.
The blast shook homes, rattled windows and lit up the horizon early Friday in the Alborz Mountains. State TV later aired a segment from what it described as the site of the blast.
One of its journalists stood in front of what appeared to be large, blackened gas cylinders, though the camera remained tightly focused and did not show anything else around the site. Defense Ministry spokesman Davood Abdi blamed the blast on a leaking gas he did not identify and said no one was killed in the explosion. READ MORE
Posted by Bill Salus at 6:02:00 AM