Top Iranian official: We’re looking for a pretext to raze Tel Aviv to the ground 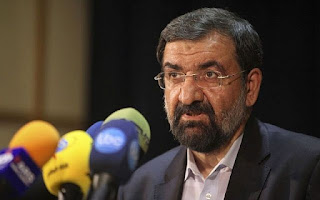 A former leader of Iran’s Revolutionary Guards has warned that Iran is just looking for an excuse to attack Israel and “raze Tel Aviv to the ground,” blaming Israel for allegedly helping the US kill top commander Qassem Soleimani.
Speaking to Lebanon’s Hezbollah-affiliated al-Mayadeen TV station on Saturday, Mohsen Rezaei was asked if Iran would carry out its previous threats to attack Israel in the event of a war with the US.
“You should have no doubt about this. We would raze Tel Aviv to the ground for sure. We have been looking for such a pretext,” Rezaei said in remarks translated by the Middle East Media Research Institute (MEMRI) and released Monday.
Rezaei, the secretary of Iran’s powerful Expediency Council, is considered a top politician and an adviser to Supreme Leader Ayatollah Ali Khamenei.
“If they (the US) do something, we can use it as a pretext to attack Israel, because Israel played a role in the martyrdom of General Soleimani,” he said, blaming Israel for tipping off the Americans to Soleimani’s location.
“We were waiting for the Americans to give us a pretext to strike Tel Aviv, just like we attacked Ayn Al-Assad,” he said referring to the US military base in Iraq, which Iran hit with several missiles in response to Soleimani’s killing.
This is not the first time Rezaei has threatened to destroy Israeli cities.
“Iran’s revenge against America for the assassination of Soleimani will be severe… Haifa and Israeli military centers will be included in the retaliation,” he said in January.
Following the Iranian attack on the US base and repeated Iranian threats, Prime Minister Benjamin Netanyahu warned Iran against attacking Israel.
“We’re standing steadfast against those who seek our lives. We’re standing with determination and with force. Whoever tries to attack us will receive a crushing blow in return,” he declared at a conference in Jerusalem. READ MORE
Posted by Bill Salus at 5:49:00 AM