Iran warns Israel of 'crushing response' to any aggression 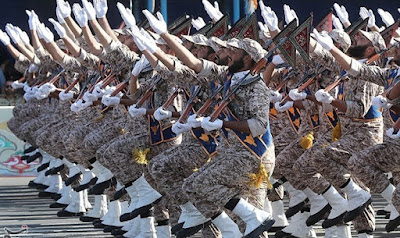 Iran will respond forcefully to any Israeli action against its interests in the region, the country’s Foreign Ministry warned on Wednesday, according to Reuters.
“The Islamic Republic of Iran will give a crushing response that will cause regret to any kind of aggression or stupid action from this regime against our country’s interests in Syria and the region,” ministry spokesman Abbas Mousavi was quoted as having said.
Iranian officials accuse Israel of carrying out attacks against military forces in Syria that are allied with Tehran.
The most recent such attack came last week, when an air strike in Damascus attributed to Israel targeted an outpost used by an Iranian militia in the Damascus area.
The Syrian Observatory for Human Rights said the air strike killed 23 Syrian and non-Syrian fighters aligned with Syrian President Bashar Al-Assad's regime.
Israel did not comment on the reports.
Iranian officials, including its Supreme Leader Ali Khamenei, regularly threaten Israel. Khamenei has several times in the past threatened to "annihilate" the cities of Tel Aviv and Haifa.
In November, he stressed, however, that his country is not against the Jews, only against the “Israeli regime” and the State of Israel, which he described as an "imposed state".
Most recently, the former Commander-in-Chief of the Iranian Revolutionary Guard (IRGC), warned in a TV interview that Iran will "raze Tel Aviv to the ground" if it is attacked by the US.
Posted by Bill Salus at 4:18:00 AM