Prime Minister Benjamin Netanyahu told a group of ministers recently that they should not expect the US to take serious action against Iran for at least the next year, according to a report Thursday.
Netanyahu on Thursday hinted publicly for the first time at unease with Washington’s hesitancy to take action, echoing statements in recent weeks from officials speaking off the record about Iran’s growing boldness.
“Iran’s brazenness in the region is increasing and even getting stronger in light of the absence of a response,” he said at an IDF officer’s graduation ceremony.
Privately, according to a report from Channel 13 news Thursday, he has been more vocal. 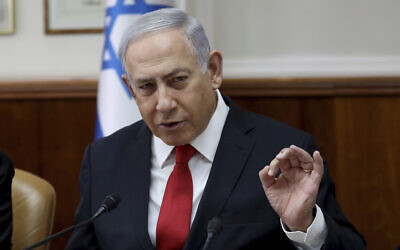 Prime Minister Benjamin Netanyahu chairs the weekly cabinet meeting at his office in Jerusalem, Sunday, Oct. 27, 2019. (Gali Tibbon/Pool Photo via AP)
Several weeks ago, Netanyahu told cabinet members in a closed-door meeting that US President Donald Trump would not act against Iran until US general elections in November 2020 at the earliest, according to the report.
The report, which did not cite a source for the information, said Netanyahu told the ministers that in the interim Israel would have to deal with Iran on its own.
Israeli military officials have expressed fears in recent days that Iran is beginning to respond to Israeli attacks on its positions in Syria, emboldened by a perceived lack of resolve from the US, which has signaled its disengagement from the region.
On Wednesday, Air Force Chief Amikam Norkin said Israel’s complete air defense array had been placed on alert to guard against missile or drone attacks from Iran or proxies across the region. READ MORE
Posted by Bill Salus at 6:01:00 AM