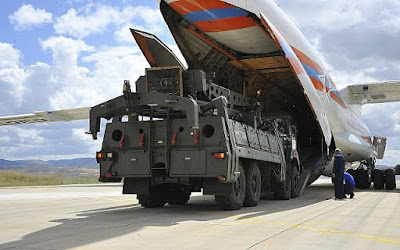 A Haber television, which is close to the government, said on its website that Turkey’s military test-fired the Russian S-400 air defense system in the Black Sea province of Sinop. It based its reports on an amateur video, reportedly filmed in Sinop, showing a contrail shooting into the sky. Other media carried similar reports. Turkish military and defense officials have refused to comment on the reports.

The US Department of Defense said that if the reports are accurate it “strongly condemns” the test.

“We have been clear: an operational S-400 system is not consistent with Turkey’s commitments as a US and NATO ally,” chief Pentagon spokesman Jonathan Rath Hoffman said. “We object to Turkey’s purchase of the system, and are deeply concerned with reports that Turkey is bringing it into operation.”

He said the system “should not be activated.”

“Doing so risks serious consequences for our security relationship,” the spokesman said, adding that Turkey has already been suspended from the hi-tech F-35 fighter jet program, “and the S-400 continues to be a barrier to progress elsewhere in the bilateral relationship.” (Read More)