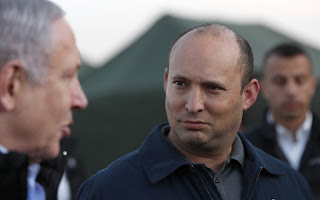 Speaking at today's special Knesset session to discuss and vote on the Israel-UAE treaty, Yamina party leader MK Naftali Bennett described the treaty as the result of pursuing the policies espoused by Jabotinsky.

"This is an historic and highly emotional occasion," he said. "This peace treaty is the realization of vision of Jabotinsky, who insisted that peace would be achieved via strength and not via concessions."

"Instead, I congratulate Netanyahu for this historic achievement. The Jewish People thanks you, but I have to add that the cancellation of plans to apply sovereignty over Judea and Samaria is deeply painful to me. Even if the Prime Minister does not end up applying sovereignty, we will do so. We will base sovereignty on Jewish settlement of the Land of Israel. We will strengthen the settlement enterprise and we will not give up so much as a millimeter of the Land of Israel."