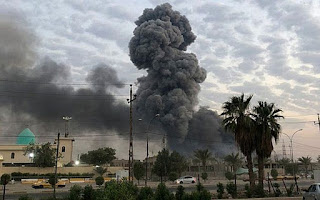 Airstrikes attributed to Israel killed at least 10 in eastern Syria Monday morning, according to a report by the Syrian Observatory for Human Rights (SOHR).

The SOHR claimed that at least six powerful explosions were heard Monday outside of the city of Albu Kamal in the Deir Ezzor region of eastern Syria. Ambulances were seen rushing from Albu Kamal to the areas targeted, SOHR reported.

Ten fatalities were reported in the airstrikes, all of them members of pro-Iranian militias. Two of the dead are said to be Syrian nationals, while the remaining eight are Iraqi nationals.

Israel, which has a policy of not commenting on its operations in Syria, has not commented on the report.

This is the third attack attributed to Israel in Syria in the past 11 days.

Sixteen pro-Iranian combatants were reportedly killed in another airstrike attributed to Israel on September 9th.