Missouri Couple Points Guns At Protesters Marching Past Their Home 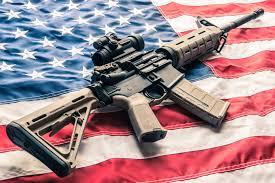 A couple in St. Louis is coming under fire on social media after images and videos showed them aiming guns at protesters who were marching past their home on a private road.
Footage showed the couple, one with a pistol and the other with what appeared to be a semiautomatic rifle, shouting at the protesters and waving the weapons around. At times, they appeared to be pointing the firearms toward the demonstrators. READ MORE
Posted by Bill Salus at 6:23:00 AM