Jordan to Israel: We will oppose even limited sovereignty move 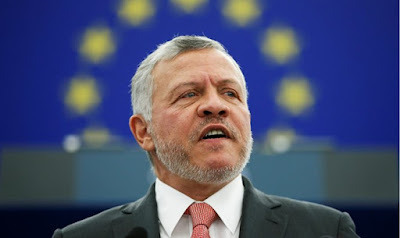 The Jordanian government has made clear to Israel through several channels that it will oppose even a limited Israeli application of sovereignty over Judea and Samaria and would respond to it in the same way it would respond to a widespread move, Channel 13 News reported on Sunday, citing Israeli sources.
One of the channels through which this message was conveyed was the recent meeting between Jordan's King Abdullah II and the head of the Mossad Yossi Cohen, the report said.
During that meeting, Cohen checked with the King on what Jordan's position would be on Israel applying limited sovereignty in the settlement blocs only or sovereignty over a small number of Jewish communities in Judea and Samaria.
The Jordanian response was that as far as the Kingdom is concerned, there is no difference between a large sovereignty move and a small sovereignty move. The Jordanians also reportedly made the same position clear to the US and some European countries to avoid uncertainty about their position on the issue.
King Abdullah II recently warned Israel against applying sovereignty in Judea and Samaria, saying that if Israel goes through with the sovereignty move, “it would lead to a massive conflict with the Hashemite Kingdom of Jordan".
He later stated that the sovereignty move would threaten stability in the Middle East.
Jordanian Prime Minister Omar al-Razzaz has threatened that the kingdom would review its relationship with Israel if the Jewish state goes ahead with the sovereignty move.
A recent report indicated that King Abdullah is refusing to communicate with Prime Minister Binyamin Netanyahu over the sovereignty plan and is also eschewing overtures made by Defense Minister Benny Gantz.
Jordan is one of only two Arab countries, along with Egypt, to have signed a peace deal with Israel. However, many Jordanians still see Israel as an enemy and protest what they view as “normalization” with the Jewish state.
In addition, the country’s parliament, which is made up mostly of Islamists, remains anti-Israel and its members have more than once called to annul the peace treaty.