Netanyahu: 'Action in Gaza can happen before the elections' 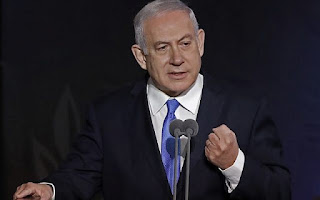 Israeli Prime Minister Binyamin Netanyahu on Friday spoke to Haifa Radio about the tension in southern Israel, warning that "action in Gaza can happen before the elections. Disquiet in the south will be answered with force that Hamas cannot imagine."
When asked about the reports that Israel is responsible for the attack on Syria, he said: "I'm not discussing those actions or others. Maybe it was the Belgian air force."
Responding to the suspension of journalist Erel Segal, Netanyahu said the decision was "a scandal!" and named two other journalists, asking "were they suspended when they supported [Blue and White leader MK Benny] Gantz and continue supporting the left every time? We see their political agenda. We're self-righteous because someone thinks differently. That's hypocrisy and most of the media has joined it."
Netanyahu added that "we're taking about balloons, and not mass murders and restaurants and buses that are exploding - that already doesn't happen. Quiet will be answered with quiet, and disquiet will be answered with indescribable force."
On Thursday, Hamas sent a message to Israel saying that the terror group had "unilaterally decided to end the launch of [explosive] balloons and rocket fire towards Israel." The source who relayed the message said that "this coming night, and this weekend as well, will serve as a test of stability."
"As peace is maintained, Israel will expand its fishing grounds back to 15 miles and return the reduced 500 trade permits. We are skeptical - but an attempt will be made to restore stability to the Gaza envelope," the official said.
Posted by Bill Salus at 5:03:00 AM