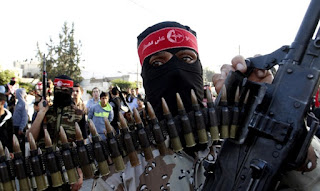 Egyptian police forces killed 17 terrorists during a shootout in the country's restive North Sinai Province, Egypt’s Ministry of Interior said on Tuesday, according to the Xinhua news agency.
In a statement, the ministry said the national security sector obtained information about a hideout of terrorist elements in the al-Obaidat area of al-Arish city.
A shootout between police forces and the terrorists resulted in the death of all 17 terrorists, the ministry said. A number of automatic guns and bombs were found at the terrorists' den, it added.
The incident comes two days after Egypt's army killed 10 terrorists as its forces thwarted a major terror attack on a military checkpoint in North Sinai.
Egypt has been fighting an insurgency in the Sinai Peninsula for several years, which at times has spilled over into other parts of the country. Most of the attacks this time period have been claimed by the Sinai Province, the Islamic State (ISIS) affiliate in Egypt.
The country has been under a state of emergency since April of 2018, after two suicide bombings at churches claimed by ISIS killed at least 45 people in the cities of Tanta and Alexandria.
In February of 2018, Egypt launched operation “Sinai 2018” in an effort to rid the Sinai Peninsula of Islamic terrorists.
Posted by Bill Salus at 5:35:00 AM