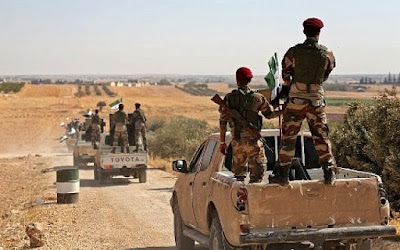 Turkey will not bow to threats over its Syria plans, the Turkish vice president said Tuesday in an apparent response to President Donald Trump’s warning to Ankara the previous day about the scope of its planned military incursion into northeastern Syria.
In Ankara, Turkish Vice President Fuat Oktay said Turkey was intent on combating Syrian Kurdish fighters across its border in Syria and on creating a zone that would allow Turkey to resettle Syrian refugees there.
“Where Turkey’s security is concerned, we determine our own path but we set our own limits,” Oktay said.
Meanwhile Turkey’s defense ministry announced that preparations for the offensive have been “completed.”
Trump said earlier this week following a phone call with Turkish President Recep Tayyip Erdogan that the United States would step aside for an expected Turkish attack on Syrian Kurdish fighters, who have fought alongside Americans for years. But he then threatened to destroy the Turks’ economy if they went too far.
The US president later cast his decision to abandon the Kurdish fighters in Syria as fulfilling a campaign promise to withdraw from “endless war” in the Middle East, even as Republican critics and others said he was sacrificing a US ally and undermining American credibility. READ MORE
Posted by Bill Salus at 4:58:00 AM