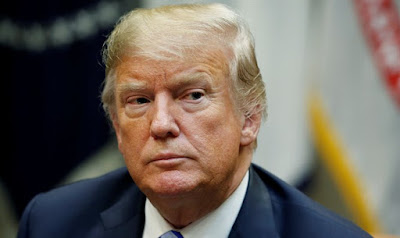 US President Donald Trump warned that he would "obliterate" the Turkish economy if Ankara took action he considers to be "off limits" in its military action in Syria.
"As I have stated strongly before, and just to reiterate, if Turkey does anything that I, in my great and unmatched wisdom, consider to be off limits, I will totally destroy and obliterate the Economy of Turkey (I’ve done before!)," Trump wrote on Twitter Monday.
"They must, with Europe and others, watch over the captured ISIS fighters and families. The U.S. has done far more than anyone could have ever expected, including the capture of 100% of the ISIS Caliphate. It is time now for others in the region, some of great wealth, to protect their own territory. THE USA IS GREAT!"
The White House announced late Sunday night that the US will pull back its forces from parts of northern Syria, opening the door for a major operation by the Turkish military in Syrian territory.
According to a statement by White House Press Secretary Stephanie Grisham, President Trump spoke with his Turkish counterpart, Recep Tayyip Erdogan, over the phone Sunday to discuss Turkey’s impending invasion of northern Syria.
“President Donald J. Trump spoke with President Recep Tayyip Erdogan of Turkey by telephone. Turkey will soon be moving forward with its long-planned operation into Northern Syria.”
Posted by Bill Salus at 4:40:00 AM