Syrian Kurdish leader warns of ‘catastrophic consequences’ from US pullout 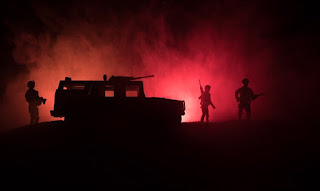 BEIRUT — A senior Syrian Kurdish official criticizes a White House statement about transferring to Turkey the responsibility for thousands of foreign Islamic State fighters held in northeastern Syria in the wake of a US pullout from positions there as “illogical.”
Abdulkarim Omar, who acts as foreign minister for the Syrian Kurds, says the US statement is unclear as the detention areas are far from the border zone where Turkey is expected to make its incursion.
Omar says the US troop withdrawal from the border will have “catastrophic consequences” because Kurdish-led forces would be preoccupied with defending the border, instead of protecting detention facilities or the crowded al-Hol camp which houses over 73,000 people, many of them IS families and supporters.
Omar calls on the international community to work to reverse US President Donald Trump’s decision or stop the Turkish offensive.
Posted by Bill Salus at 7:22:00 AM