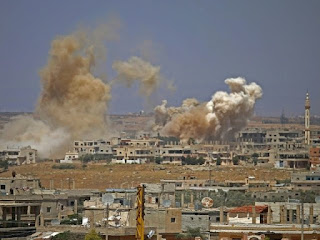 A large explosion was heard on Monday night at a weapons depot in Anbar province in western Iraq, Al-Arabiya reported.
Other Arab media outlets reported that the depot belongs to the Iranian-backed Iraqi militias and had been attacked by an unmanned aerial vehicle. It was also reported that there were casualties in the attack.
The explosion comes a day after explosions were heard overnight Sunday near the Syrian city of Al Bukamal, located near the border with Iraq.
According to Arab media reports, the area targeted is one where Iranian-affiliated Iraqi militias are located, and the explosions may have targeted them. It was also reported that several soldiers were killed.
There have been several attacks against Iraqi militias in recent weeks that have been attributed to Israel.
In late August, two senior American officials told The New York Times that Israel had carried out several air strikes in recent days on munitions storehouses for Iranian-backed groups in Iraq.
A senior Middle Eastern intelligence official told the newspaper that Israel had bombed a base north of Baghdad on July 19.
The attack on July 19 struck a base that the Middle Eastern intelligence official said was being used by the Iranian Revolutionary Guards to transfer weapons to Syria.
Posted by Bill Salus at 4:27:00 AM